Guns and the Kingdom of God 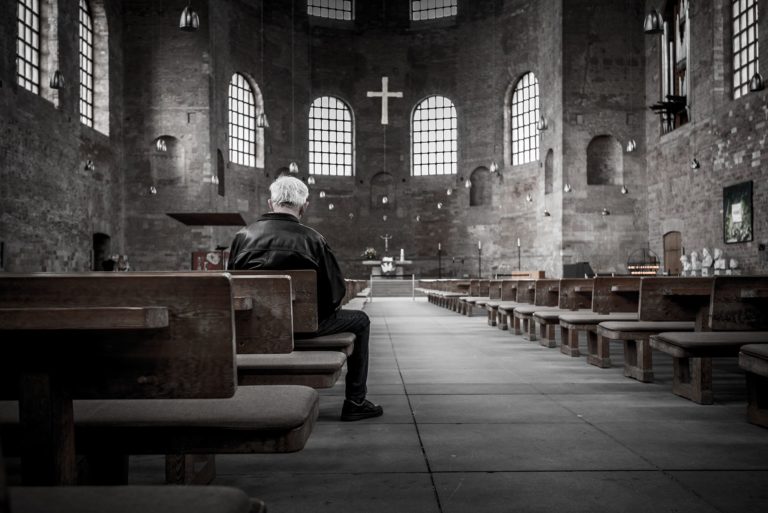 In the wake of last month’s shooting at at Emanuel AME Church in Charleston, South Carolina, the ever-constant debate of gun control has been stirred up once again. Since this horrific event happened in a house of worship, many Christians are speaking out and adding their voices to the conversation, wondering what could have been done to prevent this tragedy.

Those on the right say, “If only one of those church members had a concealed weapon on them at the time. Then perhaps they could have defended themselves!” Those on the left claim, “If stricter gun regulations had been in place, then maybe Dylann Roof would not have access to a gun to begin with!” People wonder what they should be doing to prevent something similar from happening in their own churches: Install metal detectors and implement security checkpoints at their entrances? Hire private security for all services and activities? Train their members in weapon safety and offer Concealed Carry Weapons permit classes? Support gun control legislation?

As followers of Christ, we are asking how we should respond to issues of gun ownership and gun regulations. How do we look at these topics through the lens of our heavenly citizenship as we seek to advance God’s Kingdom on earth?

Admittedly, I don’t have any perfect solutions and there are many more questions than answers. This is a very sensitive issue and many people across the board hold strong personal opinions. But I hope that as followers of Christ, we can engage in loving discourse while seeking a Christlike response to gun ownership and gun control.

One passage that is commonly referenced regarding Christ and the use of weapons is found in Luke 22:35-38:

Then Jesus asked them, “When I sent you out to preach the Good News and you did not have money, a traveler’s bag, or an extra pair of sandals, did you need anything?”

“But now,” he said, “take your money and a traveler’s bag. And if you don’t have a sword, sell your cloak and buy one! For the time has come for this prophecy about me to be fulfilled: ‘He was counted among the rebels.’ Yes, everything written about me by the prophets will come true.” “Look, Lord,” they replied, “we have two swords among us.”

When Jesus first sent the 72 disciples out to preach the good news (Luke 10), he did not instruct them to bring a weapon of any kind. He wanted them to trust in the Lord for their protection and safety. But now, a few chapters later, he changes his instructions and asks, “Hey, who’s got a sword? We’re going to need it real soon!” They reply that among the twelve of them, they have two swords (which doesn’t seem like a lot to me if they were truly intent on protecting themselves), but Jesus said that this was enough.

But then, just a few verses later, in Luke 22:49-51, when the disciples try to use their swords to defend and protect Jesus, he rebukes them and says, “No more of this!” He even goes so far as to heal the enemy whose ear had been chopped off!

Why does Jesus seem to contradict himself? Why would he tell his disciples to carry swords if he did not permit them to use them for his defense? What should our response be in light of these verses? Carry a weapon and pray we never have to use it? Trust in God fully for our protection and physical safety?

Once again, I don’t have any easy answers to these tough questions. But at the risk of sounding cliché, I find myself asking the question “What would Jesus do?”

If Jesus were on earth today, I’m not sure that he would either be walking around with a concealed handgun OR advocating for stricter gun laws. I’m guessing he would be about the business of eliminating the need for guns and healing the hearts and minds of those that seek to do harm with weapons. He would weep alongside the victims of mass shootings, and he would offer forgiveness to the perpetrator. He would not live in fear of criminals or worry about an over-controlling government taking over his rights. He would seek the changing of human hearts, not the changing of human laws.

Ultimately, instead of acting in self-defense to save his own life, Jesus gave up his divine privileges and was led like a lamb to the slaughterhouse, willingly allowing himself to be crucified by evil men.

Digging deeper into the Bible for guidance, we can look at accounts of the early church and the stories of those that were martyred for their faith in Christ. As far as I know, Stephen did not try to defend himself when he was stoned by Jewish leaders for preaching the gospel (Acts 7:51-60). The other believers did not lament, “Oh, if only he’d had a weapon. Then he could have defended himself!” In my understanding, Paul did not attempt to physically defend himself the multiple times he was beaten and persecuted by Jews and Romans alike (2 Corinthians 11:23-26). According to early church tradition, even the once brash and reckless Peter willingly laid down his life for Christ’s sake through his own crucifixion.

In reading the New Testament, I very rarely see the instructions that we should defend ourselves or protect ourselves from physical harm. But again and again, I read words like these:

“You have heard the law that says the punishment must match the injury: ‘An eye for an eye, and a tooth for a tooth.’ But I say, do not resist an evil person! If someone slaps you on the right cheek, offer the other cheek also.” (Matthew 5:38-39)

See that no one pays back evil for evil, but always try to do good to each other and to all people. (1 Thessalonians 5:15)

You must have the same attitude of that Jesus Christ had. Though he was God, he did not think of equality with God as something to cling to. Instead, he gave up his divine privileges; he took the humble position of a slave and was born a human being. When he appeared in human form, he humbled himself in obedience to God and died a criminal’s death on a cross. (Philippians 2:5-8)

The entire narrative of the gospel is to lay down your rights for the sake of Christ and for the sake of others. Our primary commandments are to love God and to love one another. As Brian Kammerzelt asks,

“Do we love our ‘rights’ more than we love our neighbor?…Would I be willing to give up my guns in northern Wisconsin if it would save a life in downtown Chicago? Yes. If it came to it. A thousand times over.”

Another question I think that we as followers of Christ must ask ourselves is this: What does it mean to be “pro-life” across the board? How should we respond to gun control and ownership if all lives truly matter?

Earlier this year, the documentary The Armor of Light premiered at the Tribeca Film Festival. The movie follows prominent evangelical minister Rev. Rob Schenck and his journey toward rethinking his position on conservative-driven “Stand Your Ground” laws. After a mass shooting in his own neighborhood, he discovers in his own heart “that being pro-gun is inconsistent with being pro-life and that living in fear is inherently antithetical to the teachings of Christ.” Rev. Schenck ultimately risked his career, livelihood, and political prominence to stand alongside those who have been affected by shootings and to strive to be consistently pro-life in all areas of society.

I’m excited for when this movie releases nationwide in October, and I would encourage many of my Christian friends — both conservatives and liberals alike — to join me in viewing this film. I’m hoping that it will continue to open doors of charitable conversations among Christian brothers and sisters looking for solutions to prevent tragedies like what happened at Emmanuel AME.

While I definitely do not have all the answers or the ability to provide perfect solutions, I would like to end on a beautiful passage that gives me hope and presents a picture of peace and love:

“The Lord will mediate disputes between nations and will settle international disputes. They will hammer their swords into plowshares and their spears into pruning hooks. Nation will no longer fight against nation, nor train for war anymore.” (Isaiah 2:4)

What a beautiful picture of God’s Kingdom! Imagine what the world will be like when we no longer have the need or desire for weapons, when there is no more war or famine. What could happen if we turn our weapons into tools that provide food for the hungry? What would life be like if the money we spent on guns and ammunition could be used for the poor and weak? What can we do in this life to make that Kingdom-picture a reality on earth now as it is in heaven?

“Why Do People Take Gun Issues So Personally?” by Jayson D. Bradley